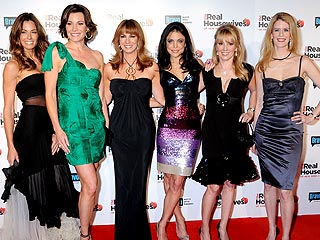 The Real Housewives of New York City are back! The second season of the hit Bravo show returns to the airwaves Feb. 17 (11 p.m. ET) with Alex McCord, Bethenny Frankel, Jill Zarin, LuAnn deLesseps, Ramona Singer and the new girl in town, Kelly Killoren Bensimon. â€œExpect a lot of fun and a lot more drama,â€ Frankel told PEOPLE at the season 2 premiere party held at New Yorkâ€™s Gilt restaurant inside the Palace Hotel Wednesday. â€œI have serious, serious disagreements and audiences should expect a big meow. The fight is with someone unexpected.â€ Though Frankel wonâ€™t reveal more about her new feud, fans of cat fights will witness an awkward confrontation between Zarin and McCord and her husband Simon van Kempen in the seasonâ€™s first episode. What do they argue about? Zarin dished to Cindy Adams about van Kempen, insulting him and telling the gossip columnist he drinks too much. â€œThe show does 100 percent edit me and the others accurately, even the bad stuff,â€ Zarin said. â€œViewers are just getting a shorten version of us, but it is really who we are.â€